Joanne Stowell is a fine artist and art instructor. Although primarily a painter, Joanne also has experience with drawing, sculpture, ceramics, printmaking and installation art. Her most recent artwork consists mainly of large-scale paintings that center around the theme of a realistic representation of motherhood, and which are based on her experiences as a mother of two. Joanne has an MFA in Visual Arts from Lesley University College of Art and Design. She currently lives and works out of her home in Ashburnham, MA. 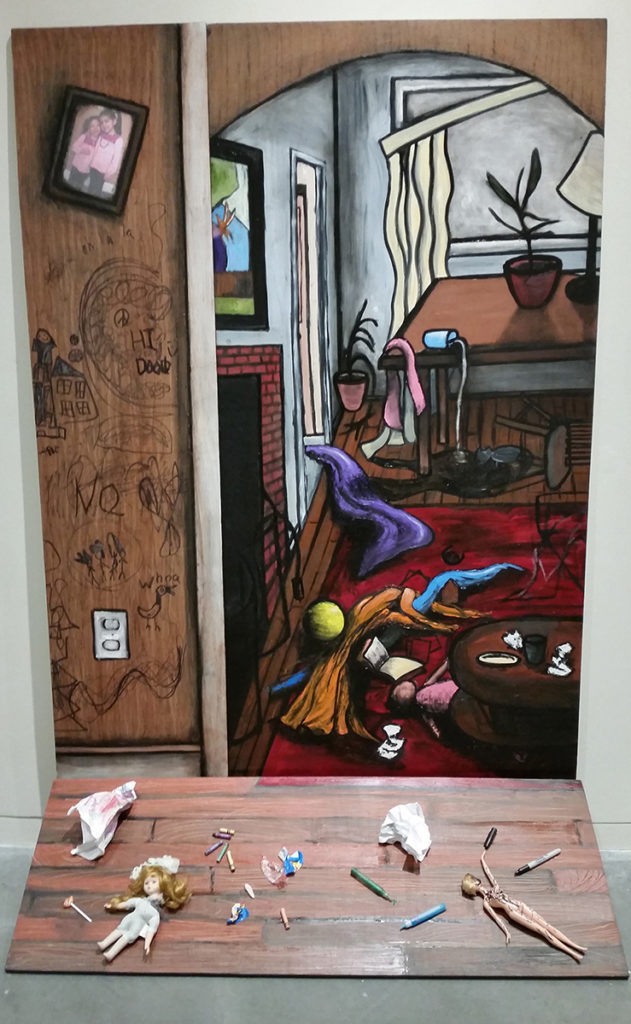 To put it simply, my work is about reality. The majority of my work centers around the un-idealized realities of motherhood. For years now I have been fascinated with the ways in which our society, as well as artists throughout history, portray highly idealized versions of the motherhood experience that have a fictitious level of perfection. As a mother of two, I realize that this perfection is at times rare and more often non-existent. In my work, I have no interest in pretending that being a mother has been nothing but wonderful. Instead I choose embrace the chaos.

Through my paintings, I attempt to capture the daily realities of being a mother. Some realities are mundane, others much more chaotic. Now more recently, as my children are growing older, I have also begun to depict the struggle of what it’s like trying to raise strong women in a world where sexism is unfortunately still alive and well.

My paintings are primarily done in oil and range from small intimate scenes of daily life to very large works full of emotion. The larger works allow my entire body to become part of the painting process and actually alleviate some of the stress of being a parent through the paint. Also in my large works I tend to use bold, black outlining combined with scraped, gritty surfaces and dramatic colors that are both in response to the romanticized images of motherhood as well as my way of better expressing the realities of the motherhood experience. My work is not meant to be pretty as reality is not always pretty.